V Rising: Fledgling’s Guide to Getting Started in the Survival MMO 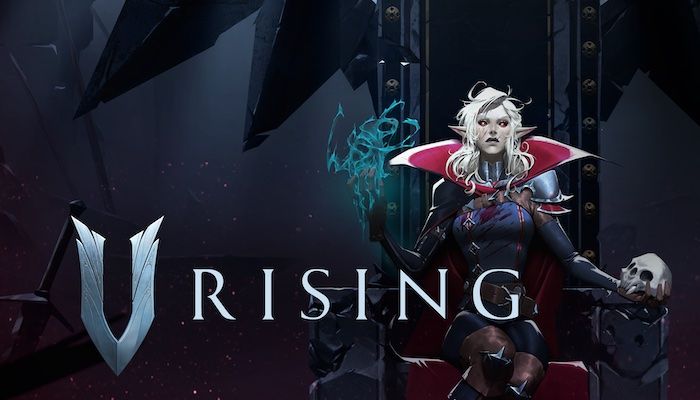 Stunlock Studios has created a great game when it comes to V Rising, with over 1.5 million players jumping into it since launch. My wife and I launched a private server a few days after it was released, and I’ve been having fun with the game ever since. We agree that the mechanics, atmosphere, and general gameplay are excellent. But our experience was very different.

Combat in V Rising is similar to Stunlock Studios’ previous Battlerite game, a team-based combat zone game. It’s a polished experience where ability usage feels responsive and players are constantly moving. During combat, players control their position using WASD and the direction a character is facing with the mouse pointer. When abilities are activated, they also target where the mouse pointer is on the screen. There is no left click to move or attack a target.

For those unfamiliar with this control scheme, it can be shocking at first. I kept clicking to move my character and would spin in the wrong direction when I wasn’t paying attention to where my mouse pointer was on the screen. Once V Rising retrained my gaming brain, it led to a lot of fun encounters. The more precise I became with the mouse, the more I could accomplish.

The build and craftsmanship in V Rising matches the aesthetic exceptionally well. Unlocking new recipes is integrated into player progress by following tooltips on what to build next, combined with hunting and draining V blood bosses. The downside is that ultimately progress are hitting a bottleneck and players need to take down certain bosses, which may require other players to help solve them.

If you like a challenging game where combat pushes a player to improve their reflexes and/or bring in friends to help you out in boss fights, then V Rising is a must-have title to at least try. However, if you’re someone who focuses on the building/crafting system typically found in other survival games, you might find that the offerings are limited at the moment.

V Rising is a game focused on fast-paced combat, which may not be for everyone, as it unfortunately is for my wife. Hopefully at some point new abilities and/or weapons will implement other types of playstyles that players can enjoy.

At the start of the journey in V Rising, the first choice is what type of server to play on, ranging from PvE-focused servers to those with hardcore full-loot PvP. Players can join clans to dominate PvP servers, or if you want a more intimate experience, you can just run a Duo PvP server or play solo.

As with other survival games, there are official servers available to play on which support up to 40 players. Players can form a clan of up to 4 people and become the most powerful vampires. Players can also run a dedicated or private server using hosting. The server owner can adjust the settings according to their needs with either option. These settings can include simplifying the day/night cycle length of bosses.

Now that the waiter has chosen, it’s time to get out of the coffin. The tutorial is decent in V Rising and allows a player to quickly start the fight by prompting you to collect bones. Be sure to loot the random sarcophagus for extra materials and pick up some of the rats for snacks. Players may want to explore the crypt a bit more, but it’s all about getting out of the door and starting to explore Farbane Wood. 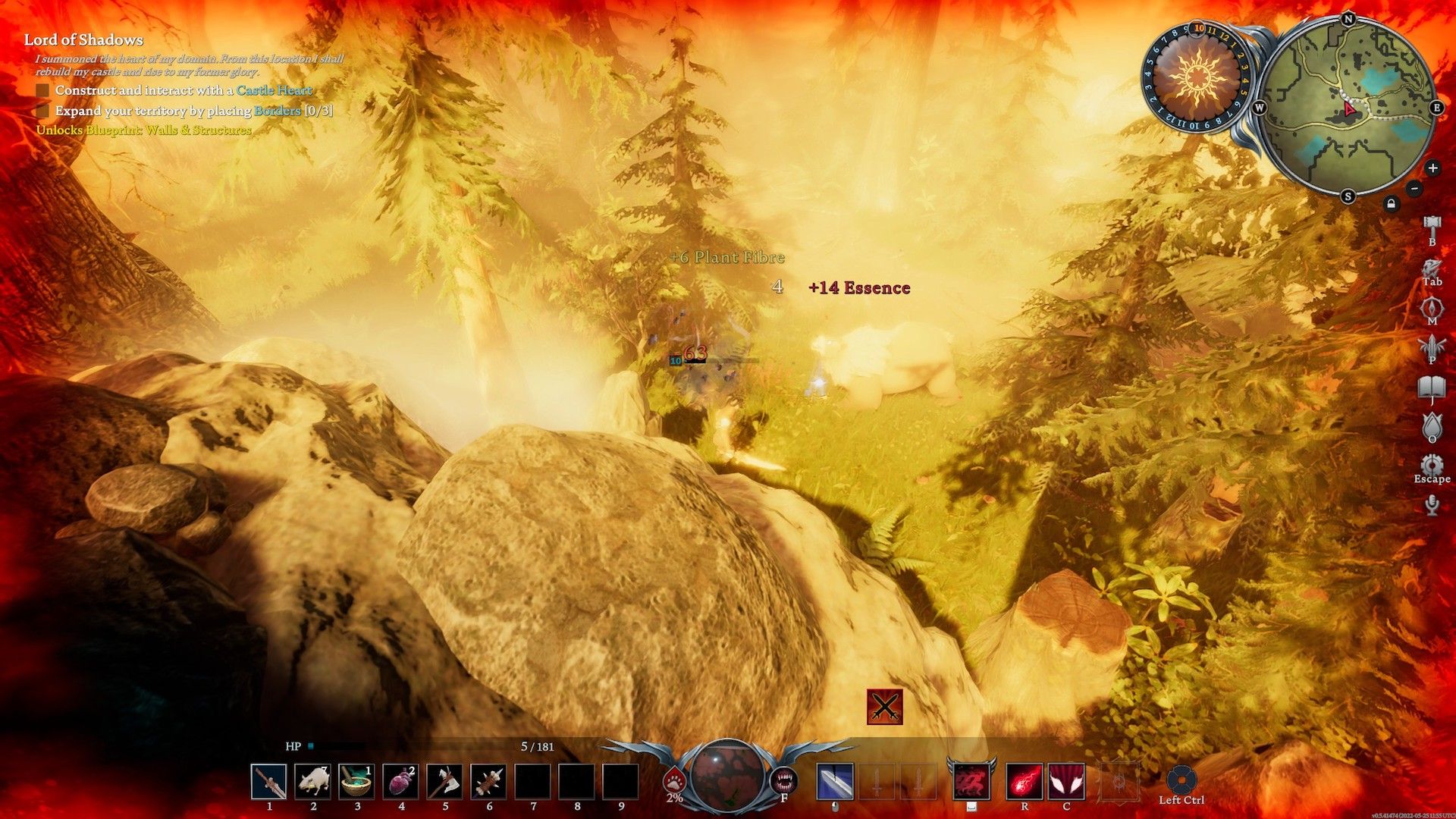 The first thing to face is the sun. That fireball in the sky can be a serious problem without additional resistance from the sun. If it is daylight, players should practice moving between the shadows cast by trees and rocks. Even small shadows will prevent a vampire from getting burned. The skill of sticking to shadows will be useful throughout the game, so it’s better to practice now rather than in the middle of a fight. 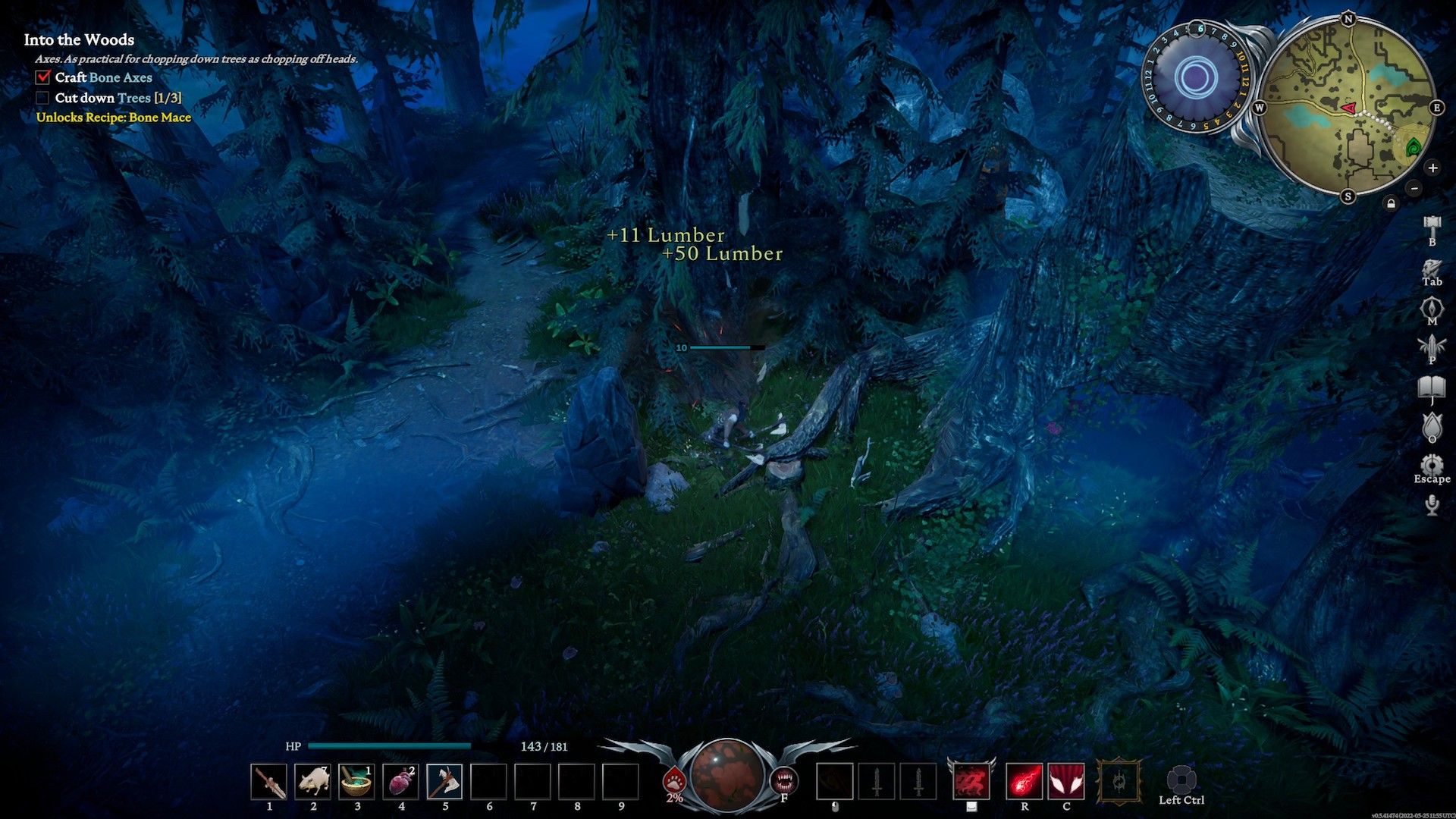 At the top left of the screen, players will see what they need to build next to unlock more crafting recipes. This acts as a good progression guide throughout the game. Once some resources have been gathered, it’s time to place the first castle core. Each player can place up to two castle hearts at a time. If a player moves out of an area, they can demolish the castle and deconstruct the core. Then build a new one somewhere else. 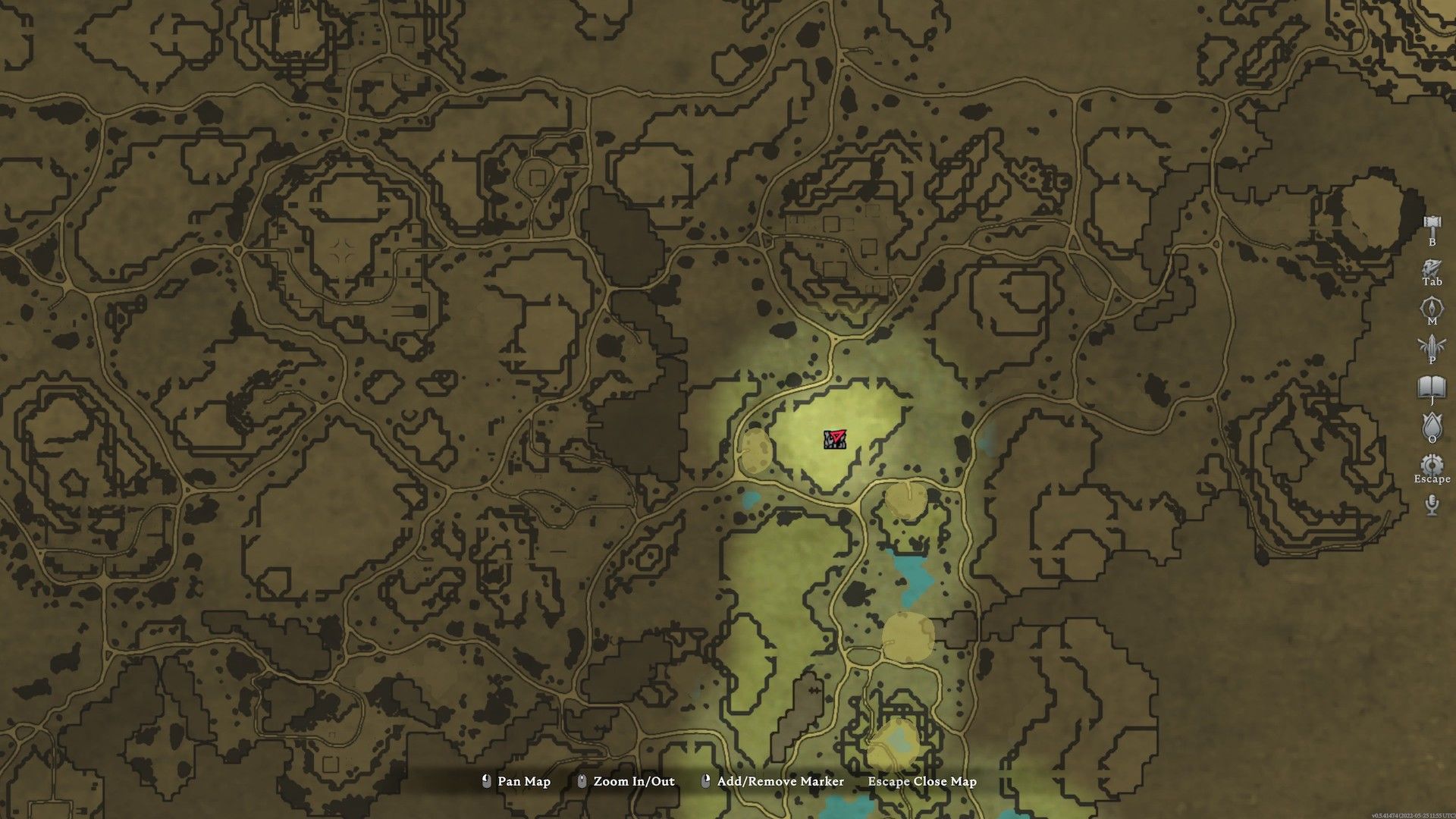 The map features open fields that usually have multiple entry points when building a castle. In these areas, players can find stone ruins of what could have been other castles. Conveniently, they provide extra stones for construction, so knock down some. There’s usually also what looks like a ruined castle core. This is usually a great place to drop one at the start of the game, but you don’t have to place one in the exact location.

Once a castle core is in place and the walls have begun to rise, the Mist Brazier will be a vampire’s new best friend. When filled with bones, it will create a small area protected from the sun. Keep in mind that it will consume the bones placed there for fuel, so be sure to turn it off at night by using F to interact and toggling the on/off switch.

I love the build system in V Rising, it’s the ability to pick up and move almost any object. Even if a chest has its inventory full, I can move it. The only things you can’t move are walls and floor tiles.

The end goal is to build a stone castle with a roof to protect our flammable bodies. To do this, players will need to progress until the ability to craft Planks and Stone Bricks is unlocked. Then they can build the stone walls, door and floor. Unlike other survival games where you build the roof, it is automatically added in V Rising once your castle walls are fully connected to a completed floor. Know that if a part is missing or if a renovation is in progress, it is easy to lose the protection of a roof with just one click.

Due to difficult bosses, death will eventually occur. When this happens, you have the option of respawning at one of the vampire gates or a bound coffin. On a PvE server, the player keeps his weapons and armor. Their blood type is reset and all items they have collected drop upon death. Something I didn’t know. When placing a new coffin, players must interact with it to bind. They can then reappear in this coffin after a death. Additionally, if a player has a Wooden Coffin and a Stone Coffin available, they can bond to one of each type. The player can then respawn in either location instead of being locked into a single option.

During exploration, players may have found silver from a container at a Bandit Camp or by killing a Traveling Trader. While carrying silver, a vampire takes constant damage. If a fight occurs or a player is still clearing an area, drop the money on the ground or leave it in a container. He can always pick it up on the way back to the castle. Just make sure you don’t forget it, as it comes in handy later in the game once the human form is unlocked. 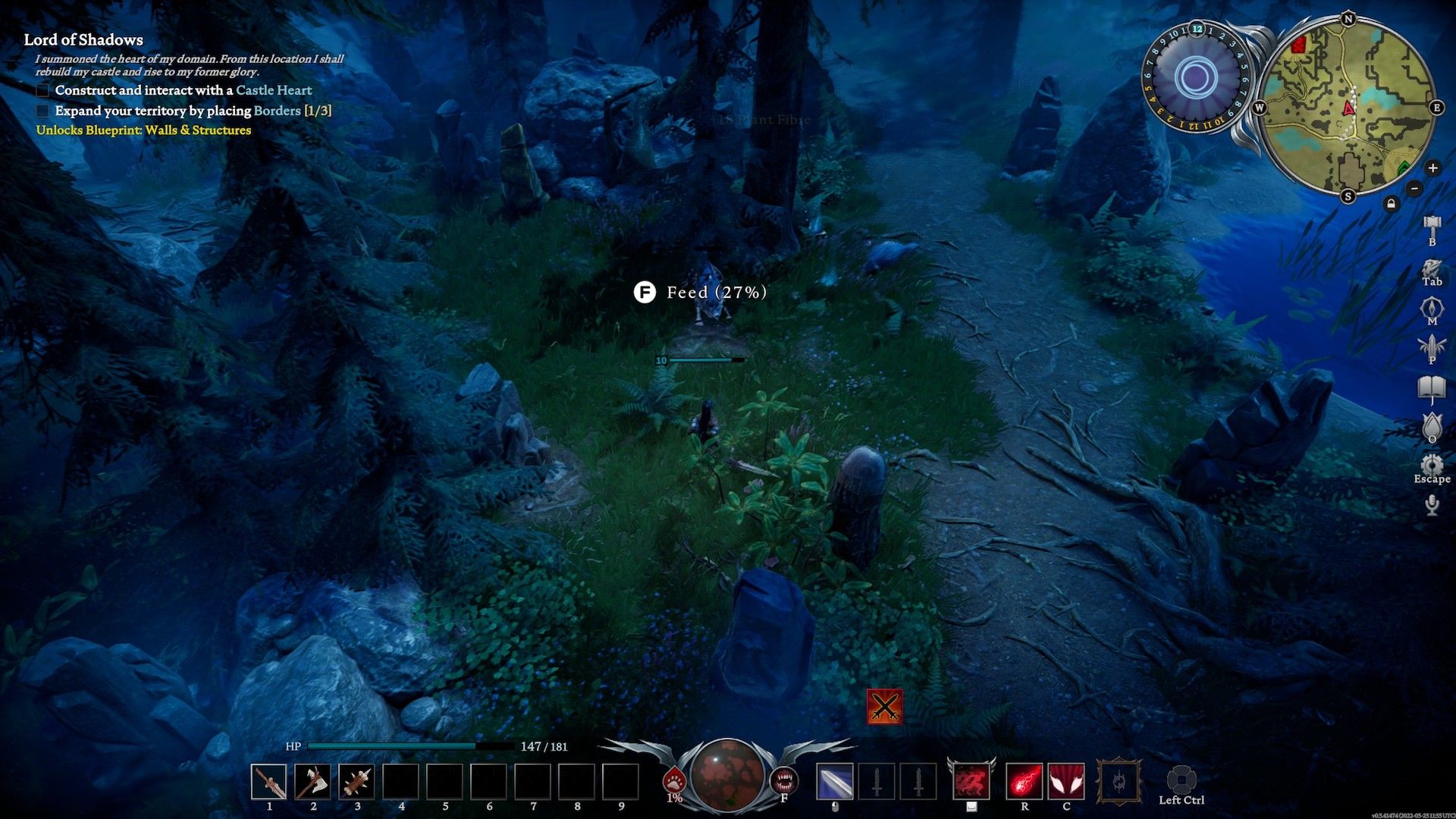 As a vampire, it is essential to eat well. But before heading into a major fight or harvest run, the type of blood players have swallowed is also extremely helpful. The six different blood types include Brute, Creature, Rogue, Scholar, Warrior, and Worker. Each has five quality levels, and the quality percentage of a target’s blood determines the level. There have been bosses where the only reason I won was because of the blood I drank beforehand.

Eventually, players can collect higher quality blood by capturing people and placing them in cells. At the start of the game, make sure to feed from a target if the percentage is over 20%. In an emergency, rats can be tempting. It is also a quick way to lose bonuses.

The last thing I want to touch on in this fledgling vampire guild in V Rising is the hunt for v blood bosses. Players can find these named enemies when exploring or using a castle’s Bloody Quirk to follow them. While the first few aren’t too difficult, the challenge and mechanics escalate quickly. Each v blood boss will unlock new abilities and recipes which in some cases are essential for progression. 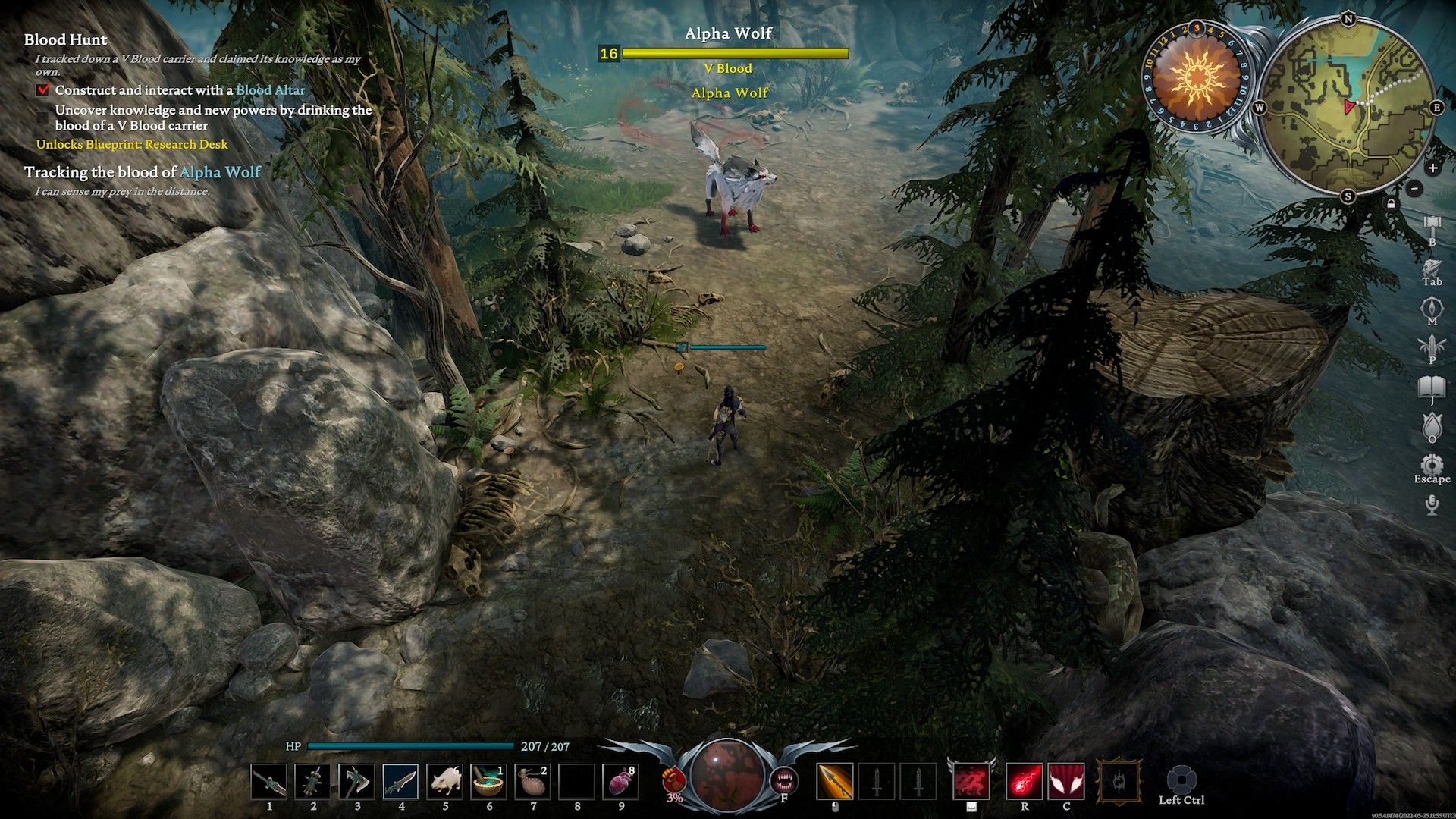 While in a clan, other clan members can access newly unlocked recipes at a workbench. But to acquire the abilities, a player must be present and able to feed from a downed boss. Early on, make sure to take out the Alpha Wolf first. It’s an easy blood fight and unlocks your wolf form, which speeds up movement. Also, in wolf form, other wolves will not attack.

When you’re preparing to clear a large area or chase down a blood target, I strongly suggest you go to the scene during the day and scout the area. Boss battles can take quite a long time after the first few fights, and on several occasions I’ve come close to winning a long battle only to have the sunrise force me to run away or roast myself as the boss stuns me with abilities.

I hope this guide has provided some tips for getting started in V Rising and can help players enjoy their first experience. So far I’m enjoying my time with the game and can’t wait for Stunlock Studios to release more content.