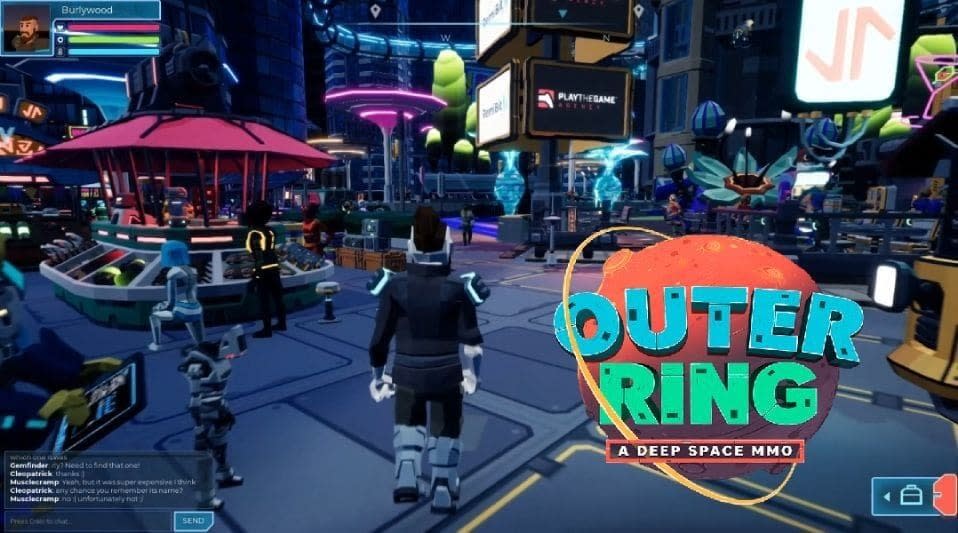 Outer Ring is an MMORPG video game in the universe of science fiction and fantasy based on the Play to Earn economic concept. Windex Technologies OÜ developed the game in partnership with Maniac Panda Games

Navarre, Spain, Jan. 05, 2022 (GLOBE NEWSWIRE) — As cryptocurrency becomes a huge hit, the future of the crypto and gaming markets seems limitless. Expectations and developments are set to skyrocket, with games like Axie Infinity raking in $84.9 million in June 2021 as an example. The market has exploded exponentially from 2020 to 2021, enough to pull the progression and increase by more than 170%. In the global video game market, there has also been a significant change. In the years 2020 to 2021, the market has grown at an exponential rate, increasing by more than 170%. With all the changes in the video game industry, outer ring decided to be part of it by offering its customers something that can connect the persistent virtual world to the real economy, enabling a direct connection between the two.

Outer Ring is ready to launch a player-focused game metaverse, an MMORPG (Massively Multiplayer Online Role-Playing Game) based on the Play To Earn business model, which will offer a combination of science fiction and fantasy universes. The model was created by Windex Technologies OÜ in collaboration with Nexxyo Labs, under the ManiacPanda Games brand.

The platform is developing a freemium model for all of its customers while offering them preview access to the various phases of private and public sales. Moreover, with the existing economic system, the platform aims to provide users with an option to purchase both in-game and out-of-game via a decentralized exchange (DEX) integrated into the game website or player interaction. .

The Outer Ring game is generally based on a server farm/cluster which creates a persistent virtual world. This creation allows users to interact in real time, much like in-game social networks. The game is a combination of “old school” systems, which appeal to nostalgia in a target audience segment. The other existing concept, such as the real economy based on the blockchain, appeals to a public more interested in the economic-financial aspect or more relaxed, trying their hand at the game economy for the first time, thus diversifying as much as the target audience as possible. possible.

The game will be released in stages, each based on a set of stages, allowing for easy testing and upgrading. In addition, this technique will allow users to start enjoying the game right away, rewarding those who have been dedicated to the project from the start. Additionally, the platform will provide players with additional challenges such as arenas, dungeons, and new areas to traverse. Players will be able to earn rewards based on completing these challenges.

The outer ring game has its own rules and its own economic structure. The Exocredits (EXO) token, the official in-game currency that connects the game to the world of cryptocurrencies, will be owned by players. Also, Galactic Quadrants (GQ), a second token that will facilitate interaction with important cryptocurrencies. Both tokens can be obtained in a variety of ways, including trading goods, crafting items, then selling them, and completing in-game objectives.

The “freemium” game concept is one of the platform’s features to offer its consumers. This strategy allows players to have access to the game and enjoy it from the start without paying any fees. Instead, the approach ensures that users will be able to earn more rewards through their efforts. Additionally, the player who contributes to the in-game economy is rewarded with direct trade and purchases, promoting early entry and use of the economy.

Potential players can visit the website here to see the wide range of items available. Outer Ring is excited to announce the launch of a gamer-focused game metaverse and a private sale. The sales campaign is divided into three stages.

Those who invest in the first round will receive 40% of the total net income of the outer ring. The objective of this round is to raise €6,000,000.00. The project’s governance token, Galactic Quadrants (GQ), will be distributed to investors in the second round. Additionally, users who want to be part of the third round of funding will purchase “Loot Box” packages that include digital content used in-game or in the marketplace.

Outer Ring is an MMORPG (massively multiplayer online role-playing game) that combines fantasy and science fiction in an open world that allows exploration, all supported by its Play to Earn system and Player Driven Economy. It is based on the novel of the same name Outer Ring Saga. The platform aims to become the game of the year in 2022 and to perpetuate different sagas/extensions for the next 5 to 10 years.

For more information, users can visit Outer Ring official website here or join the Telegram and Twitter to connect.

The information provided in this press release is not investment advice, financial advice or trading advice. It is recommended that you exercise due diligence (including consulting a professional financial adviser before investing or trading in securities and cryptocurrencies).