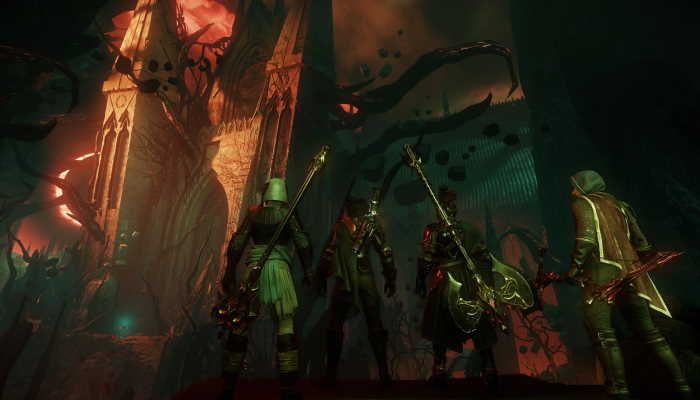 On the PTR last week, I got a chance to check out some of the latest endgame content coming to New World, namely the upcoming Expedition, Tempest’s Heart.

New world approaches the MMORPG a little differently than most. The roots of survival gaming are still strongly felt in its DNA, and it’s a title that focused so heavily on its PvP side during development that Amazon delayed the MMO to make sure it had enough PvE quests for players to enjoy. While for some the quantity – and quality – of these PvE quests and encounters may leave something to be desired, one aspect that I always liked was the dungeon-like expeditions.

It is these expeditions that really make New world shine as an MMO, in my opinion, and the latest to be added continues that tradition.

Although the large-scale PvP battles remind you that you’re not alone in Aeternum (as some of the island’s major trading towns do), they can be chaotic and unorganized. It’s a mass of people slamming into each other sometimes with no real strategy unless you’re part of a company that really understands how to attack and defend.

Expeditions, however, require the kind of planning and strategy that will be familiar to longtime MMORPG fans. Although not as extensive as the epic raids that make up World of Warcraft history for sure, Expeditions in New world require a balanced party, planning and a bit of skill to pull off.

The latest Expedition that comes with the March Update requires players to be at their best. A level 60 expedition, it is assumed that you have built your character using all the tools available at the moment, as well as learned to play your role in a party as well as you can. While the classless system allows players to create any combination of weapons they want, ultimately the meta still relies heavily on a balanced party that remembers the Holy Trinity.

Our group, led by New world developer Mike Willette from Amazon Games acting as our tank, was pretty balanced. We had some DPS, as well as a main healer (I also provided healing when I could). The Tempest’s Heart takes players into what is described as a “corrupted dimension of reality”. Players face the final showdown with Isabella in the dungeon, as well as some of the toughest boss fights I’ve encountered in New world so far.

What stood out to me the most initially, however, were the visuals. While some stand out, like Starstone and its laser mazes, as well as the beautiful ruins of Lazarus’ instrumentality, nothing looks or feels like the heart of Tempest. The corruption surrounding Myrkgard is global as it feels like you’re not just traveling through Aeternum, but also Isabella’s subconscious.

There were times when we were greeted by a twisting hallway, tendrils reaching for the sky all around us. Crimson blood shone everywhere as our footsteps echoed eerily. He set the stage for what is a visually impressive expedition. At every turn, there was no doubt that there was something seriously wrong around me, the corruption that plagues all of Aeternum seemingly manifesting from here.

It’s not just a wonderful world to admire, however. The storyline takes you on a journey to learn more about Isabella, her crew, and their fate. Seeing this unfold in the memories as the party progresses through the expedition is a nice touch, although it would be cool if we could somehow participate in some of these narrative moments instead of just watching them happen. unwind and then move on.

Where the Storm’s heart shines, however, are its encounters. of the new world The team did a good job of setting up tough encounters throughout each expedition, and it seemed like Tempest’s Heart was no exception. It’s not just the boss fights either, which are plentiful and require you to learn boss attack patterns and more to survive, but regular encounters with monsters can also be a challenge. Knowing how to engage a group with the perfect pull reminded me of racing Carn Dum for the first time in The Lord of the Rings online (which was one of my first endgame dungeons I’ve ever run in an MMO as a guild leader).

Carefully choosing our path through waves of enemies, puzzles and more gave me the teamwork and social vibes I look for in an MMO, something of the new world Expeditions followed one another throughout his short life. Boss battles require exquisite timing and teamwork to ensure you survive. One such fight saw us take on a dweller controlled by Isabella. This boss had the ability to add a bleeding debuff that stacks if you get caught in an AOE from time to time. Dancing around the battlefield, trying to figure out where we needed to go to avoid each wave required constant communication.

Later in this fight, orbs would be spawned that would power up the boss, as well as applying this debuff. Just so you also know, this debuff does not go away either. It simply undermines your health until you wipe it away. Shooting down those orbs while ensuring the boss is handled also forces you to be on your toes. Calling the orb, keeping the tank and party healed through all of this, and more – it’s a lot to deal with.

These are the times when New world really seems to shine. For all its issues with slow leveling, lackluster PvE grind and more at launch, the team at Amazon is balancing and tweaking the MMO to get it where players want it – and those Expedition experiences are a big step in this direction. This is when the MMO most feels like an MMO, in my opinion. We just need more of them – as well as small encounters like this in our regular quests.

If you’re looking for a reason to watch the endgame in New worldthis expedition is a good reason to dust off the Greataxe and Syndicate tabard (because there’s only one faction to consider, of course).