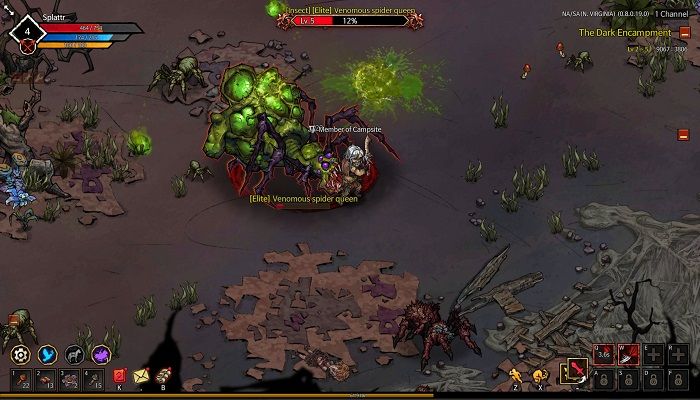 Every week, we scour the internet for all things indie MMOs so you don’t have to. Since I finally had the chance to take part in the test, the big news this week is how much I liked the Crazy world Alpha 5.0 testing. The gory visuals may be too much for some, so be sure to check out other upcoming alphas and betas at an indie MMO near you. But hey, why waste time telling you what you’ll find below when you could already read it. So let’s stop wasting time and get started with this week’s Indie MMO Spotlight.

ether story had two patches this week. In addition to some bug fixes, some of the new content in Amberfall has received reputation reward bonuses. There have also been some changes to mining and smithing levels to allow faster access to ores and the items you can craft with them.

Following last week’s announcement that the team would be focusing on bug fixes, a new patch was released this week. The patch is full of polish and the notes can be found on the BoT steam page.

It was brought to my attention (thanks to forum member Stizzled) that although chimeraland has been officially released in some SEA markets that there is no regional lock in place. This means anyone can download and play Chimeraland. I was able to verify it personally on PC, but it seems that it is still not available on the Google Play Store for Android users. Let me know if it can be downloaded from the Apple Store in the comments below.

Yager Development released its 9th Dev Diary Tuesday. This time around, they tackled a common question: how will they monetize the game? While skins and other cosmetics will be a source of revenue, Yager also plans to offer Starter Packs, a Fortuna Pass, and the premium Aurum currency that can be used to supplement the K-Marks you earn in-game. In conjunction with the development diary, a interview with Twitch streamer LasySaiyanPrince also covers these topics.

With the Panacea update in the rearview mirror, the dual universe the roadmap has been updated with the next patch, Athena. Anyone familiar with Greek mythology will quickly assume that the patch will be war-focused and while there are a few non-combat enhancements included in the Athena patch, the main focus will be on PVP.

The siege camp held a Dev Livestream on the FoxholeGame Twitch channel this week. The stream covered the upcoming Update 48. The team went over a bunch of small improvements before getting into the new content players can expect in the update.

More than a static area, player-created cities fractured online will grow with your character. Starting as a hamlet, player settlements will progress through 15 ranks over 3 stages. You can read all about the benefits of player-created cities in the Feature Spotlight – Cities and Technology post from earlier this week.

With Weekly Update 308, players will now be able to progress through a new character development tree – Forestry. Like the recent mining update, the forestry update brings a host of changes, including new 5-level lumber generators and a new carpentry workstation.

On a no-Gloria Victis note, Black Eye Games has also announced that they will release Nadir, a roguelike adventure influenced by Dante’s Divine Comedy. Developed by some recently acquired members, the GV team, Nadir is due out sometime in 2022 and currently has a demo available through the Steam Next Fest.

The following in the echo The pre-alpha test has been postponed for a week to March 12 and 13. The team hopes to have 1000 attendees at the event. Invitations to the event are being sent out, so be sure to check your email and spam folder to see if you’re one of the lucky ones. There is also a new article on the website to give you a little taste of in the echo traditions.

Alpha Test 5.0 ends today, Sunday, February 27. If you also enjoyed the test, or if you did not have the opportunity to participate, Founder’s Packs are now available in the Crazy world box. Any purchases made will be replenished for all future testing and again upon official release.

With a new patch released this week, the Spring Festival is back OrbusVR. The patch also added 6 new NPCs and cleaned up a dozen lore books across the world. You can read the full patch notes here.

In addition to his Discord channel, there is now a official past fate Guilded Server.

Hello, dear community! Today’s post introduces you to a creature that fascinates us (and by “us” I mean mostly me??). It doesn’t have a name yet, and we hope to get your help finding a name for it. More on this at the end of the thread??. pic.twitter.com/H6eXBRkpHV

There hasn’t been much communication from the development team, but the February Dev Blog compensates for that. It’s a long read and covers a multitude of topics.

Dev Diary #323 is available for reading.

A new development update (#16) was released this week. Be sure to check it out to catch up on all the good stuff the team has been working on.

It’s all about the Paladin in this week class discussion on the Honor scars forums. If you want to become a holy warrior, be sure to join the conversation.

the The February newsletter is out and it gives an in-depth look at player bases.

Twin Drums reached a milestone this week with the release of Alpha-1 for The Chronicles of Wagadu. If you are an Alpha Backer, be sure to check your email for your login credentials.