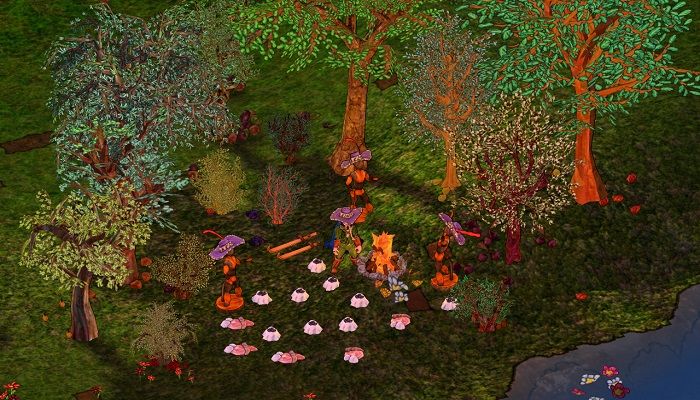 As I started preparing for this week’s Indie MMO Spotlight, it looked like it was going to be a week of lighthearted news. Considering the first IMS only had seven entries, the 16 items (including two new games) I’ve collected aren’t too bad after all. Although some news is not very muscular, I continue to add more to give as much visibility as possible to these independent titles. Sometimes less can be more, so let me know in the comments if you want the Spotlight to continue pumping up all the little happenings in the indie space or stick to the big news. Anyway, let’s start with this week’s Indie MMO Spotlight.

You asked, and Novaquark answered. This week, a new FROM vlog was released to answer all community questions submitted about the upcoming Demeter update. If the follow-up discussion on the forums is any indicator, the vlog generated as many questions as it answered.

Weekly Update #295 is live. Instead of adding another new progression system, the main focus of the update was to make improvements to the terrain. Hundreds of places where the ground was uneven have been smoothed out. Inconsistencies, where visuals suggested players could walk on impassable terrain, have also been addressed. And a new puddle system has been added. There have also been adjustments to server accessibility that affect buffs and debuffs triggered by underpopulation and overpopulation.

Even though it’s colder outside, things are warming up inside. Haven and home. With the latest patch, there are now more fruits, seeds, and seasonal foods to go along with the new planting mechanics. Discover all the changes in the patch notes.

Many people, myself included, believe that the next major evolution in MMOs will be the move to virtual reality. If you haven’t kept up with advances in VR technology and software development, this might sound crazy. This short video I found on the Ilysia Twitter will surely change your mind.

Hello everyone! Hope you’re all having a good week so far! We decided to just post a regular video, totally not special at all, for you to watch. #VR #indie game #indiedev #Game development #MMORPG Check it here! ?? pic.twitter.com/OkB5S2il2N

Last week we mentioned that Jandisoft had hinted at another closed alpha coming for Crazy world in December. Although the date has not yet been announced, Alpha event registrations are now open on the Mad World site.

If the turn-based combat of Broken ranks looks interesting, you might want to take a look at Legacy of the Mist. I met Mist Legacy for the first time this week, but it’s in Early Access on Steam since early October.

A Profane The Twitter feed reviews the fifth primordial element, the spirit, which pervades the universe in Profane. The spirit, as well as light, shadow, instinct, and life, can all be harnessed in your quest for power and used for both good and evil.

In case you missed it, here is the link to Dev Diary #310which is mostly about launching the mobile UI.

The 18th class playable in RotMG was unveiled this week. Say hello to Kensei. If you want a quick preview of the new class, the Kensei is available to play on the test server.

reign of the guilds

reign of the guilds doesn’t make its way into Indie MMO Spotlight very often, so it’s nice to see they got a decently sized update this week. You can read all about them news post.

I’m always looking for projects to follow, so here’s a new one for you. I really haven’t had the opportunity to delve into it, but Ranged Knights Online appears to be a faction-based PvP MMORPG. Tell me what you think of this.

realms of souls had its first playtest on Tuesday, and the second test is scheduled for today at 5:00 p.m. EST. If you missed the chance to take part in the first test, Power Proc Studios has released a short gameplay video of some of the action.

To celebrate its 10th anniversary, Starry Sonata 2 is holding an in-game event. From November 12 to 23, players will be able to enjoy the benefits of several bonuses. Players will also be able to collect Face Kits each day of the event. You can read all about the event here.

ATT received a new patch this week, which brought significant improvements to client-side impact. You can read about this and all other changes in the update log posted on Reddit.

Okay, I mentioned earlier that VR might be the next big thing in MMOs. Then I came across this short video of the cooking system in Zenith: the last cityand now I question myself.

Starbase – A large patch at the end of October, company ships were activated and many other updates and fixes.