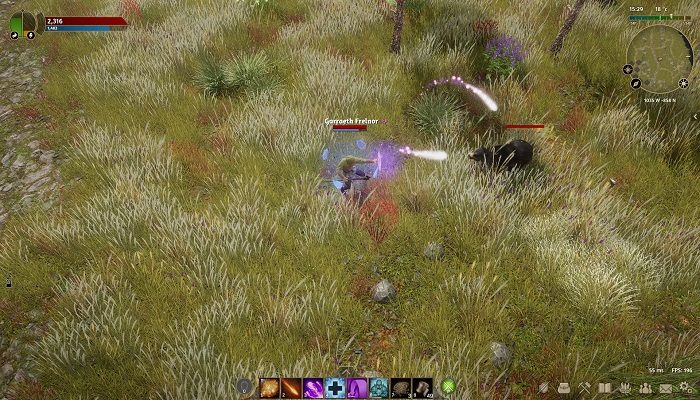 Every week, we scour the internet for all things indie MMOs so you don’t have to. This week, we’re getting a lesson in play-2-earn economics, canceling a Kickstarter, and preparing for next week’s Alpha and Beta testing. But let’s stop wasting time talking about it and start with this week’s Indie MMO Spotlight.

Are you interested in seeing what it’s like to work on an indie game? Well, you can with Aether Story. Just follow phanxgames on Twitch and watch them write and test code during their live streams.

Thanks to a recent tweet, we now know that the weather will have more than a visual effect in BitCraft. It can damage your buildings.

Whitemoon has just announced that TaernCon 2022 will be a live event. The event will take place on July 2 in Wroclaw, Poland. You can read all about it in this news post.

DaviDeMo (a Cinderstone programmer) arrested by the Cinderstone Discord a few days ago to let us know that while the team isn’t the best at providing dev updates to the community, they are still hard at work preparing for an open beta. They also mentioned that they would be adding more closed beta testers and ended the post with an updated roadmap, which you can see below.

A new developer update video has arrived this week. The video provides a recap of Closed Beta 2 and includes topics such as player feedback on game difficulty, gear power disparity, and how the team handles cheaters.

A news this week on the dual universe the forums gave players a status update Double access coupons (DAC), the monthly subscription tokens that were part of the original Kickstarter rewards. Judging by the forum responsesthe post raised more questions than it answered.

Ask Aphelia Podcast Episode #2 was also released this week. The NQ team covered a variety of topics, including questions about the LUA API and player griefing (in a PvP game, who would have thought?).

Gellyberry prematurely canceled the Ethyrian Kick this week. At the time of cancellation, 65 backers had pledged $9,238, well below the goal of $63,394. The team seems undeterred by this, and according to an announcement on their Discord Channelthey will continue to work on the project while looking for other ways to raise funds.

If you want to check fractured online but don’t think you have to buy a Founders Pack to access a beta test, then you’re in luck. From May 25 to May 31, everyone can check fractured online free. And if you end up liking what you see and want to keep playing, all of your free week progress will carry over to a paid account. Dynamight Studios will kick off the event with Episode 4 of Conseil de l’Elysée at 3:00 PM EST on gamigo Twitch channel.

Be sure to stop at GV Steam page to check all the changes of Weekly Update 319. There’s a new Market UI, a bit of work done on the Valley of Death cross-server tournaments, and the usual quality of life improvements and bug fixes.

Looks like we have another indie project to follow – Hytale. From the creators of the Hypixel server, Hytale will be, “Embark on a journey of adventure and creativity! Hytale combines the scope of a sandbox with the depth of an RPG, immersing players in a procedurally generated world where teetering towers and deep dungeons promise rich rewards. Designed for creative gamers, Hytale’s engine supports everything from block-by-block castle building to scripting and customization delivered using powerful, easy-to-use tools.

Have you ever wondered how exactly a play-2-earn economy works? In a post this weekthe Legends of Aria The team explains how they plan to build a sustainable economy by offsetting the inflationary aspects experienced by other play-2-earn games.

Life is a feudal MMO

Have you ever wondered what happened to the Life is a feudal MMO? At MassivelyOP, Chris Neal Asked This Exact Question this week. Turns out he’s still alive…sort of.

K’tula’s Cove Chaos Dungeon will officially launch on Tuesday, May 24. A recent blog post overview of the new equipment you can earn.

The next pre-launch season, Strategy Academy, begins May 27 at 8:00 a.m. and ends May 30. Be sure to log in and earn your Season Points.

In Dev Diary #335, Michi talks about her work redesigning the business creation screen. Nick also stops by to talk about his efforts to get the best value in the advertising department.

The Ravendawn team released their official trailer this week. They followed that up with a livestream on Saturday to discuss many of the changes coming with the upcoming Alpha 5.

Update 2.3.1.2 went live this week. You can read the patch notes on the RotMG Blog. There was also another article at the end of the week to present some of the new types of weapons added to the game.

The Infernal Demon race is the topic of the week on the SoH forum. Be sure to participate and give your opinion on how this race should be developed.

In their news post this week, Juvty Worlds discusses their latest work on breeding and animal husbandry.

It’s been a while since I checked Xsyon, and it looks like I missed a patch last week. With the patch, the world map has been enlarged, making the playable terrain approximately 7 times larger than before. You can read all the other changes on the Xyon-Blog.