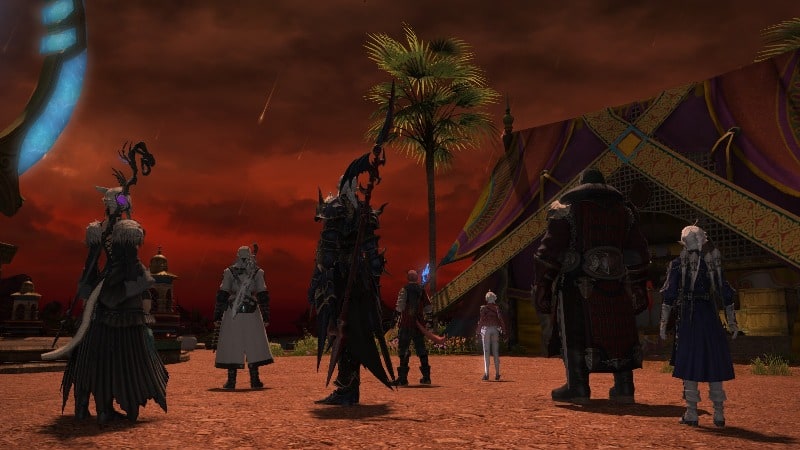 It’s been a long road for Creative Business Unit 3, led by Naoki Yoshida. They pulled Final Fantasy 14 to the brink of death and enjoyed critical and commercial success over the next few years. With three previous expansions: Heavensward, Stormblood, and Shadowbringers, the narrative, mechanics, and game world have all evolved. All while balancing a fine line between creating a relatively non-committal MMO experience and telling a traditional Final Fantasy story.

Now, with Final Fantasy 14: Endwalker, the team is now searching for how they can still surpass the incredible heights of Shadowbringers and now induce an impending sense of dread and finality. It’s in the form of what the game calls “The Final Days,” an apocalyptic event that seeks to destroy the world as you know it.

Tales of loss, fire and faith

You might find yourself battling gods and monsters, but at the heart of Final Fantasy 14: Endwalker are stories of humanity. The Last Days are upon you, and now your loyal band of characters, the Scions of the Seventh Dawn, and your player character, the Warrior of Light must band together and attempt to find a way to stop it. Woven into a grander political story as featured in previous expansions, Endwalker ruminates on the impact of war, propaganda, and casualties, in addition to also giving us the traditional high-fantasy gameplay you’ve come to expect from the AAA franchise. JRPG.

It’s a slow start, with Endwalker establishing some plotlines and several beautifully crafted areas. Of note is the province of Thavnair, which we only ever saw mentioned in passing. Now it’s a beautifully realized melting pot of races and cultures, with a distinctly South Asian influence that’s not only rarely seen in an MMO, but in the industry as a whole. It’s too often that we see characters with Indian accents played for laughs, and it’s really heartwarming to see such representation in such a great title. The town of Radz-at-Han is lined with colorful streets, garment factories and is labyrinthine; in the right direction.

In the hours we’ve spent with our main characters, as well as many of the returning characters we’ve met along the way, the best moments of Final Fantasy 14: Endwalker isn’t in the raids pump , or the wicked nihilists, but the stories of the people caught in the middle. With heartbreaking scenes of a broken nation, condemned to listen to its leaders in blind populism, to the fickle efforts of normal citizens, trying to save what is left of their people. Endwalker seeks to tug at your heartstrings and manages to pull off almost every turn.

Aided by surprisingly beautiful and haunting areas, with journeys through unknown lands, find out what the questions Endwalker asks are about. Fatalism, insurmountable grief and finally; to hope. If you’re at all invested in the plot of Final Fantasy 14, you’ll find it hard to lift your jaw off the ground during the incredible heights this game manages to reach. Natsuko Ishikawa returns to the Endwalker pen, and her mastery of weaving emotional plot threads, the status quo, and knowing when to seriously lay on the cheese if necessary is masterful. Endwalker not only gives you a good MMO story experience, but one of the most memorable original tales we’ve seen from the Final Fantasy franchise in decades.

Aided by slick cinematic direction and one of the best ensemble casts in gaming, Final Fantasy 14 Endwalker brings with it the emotional weight its name promises and more. For avid Final Fantasy fans, Endwalker is littered with references and homages to Final Fantasy IV, with some of its best ideas honed to the razor’s edge, only to cut through your emotions like butter when the time comes.

On the wings of hope

Several types of single-player content are woven into Endwalker’s grand narrative, which may involve you taking control of one of the Scions of the Seventh Dawn or your player character in a Guided Zone. These range from a Metal Gear Solid-like stealth section, to slower, story-driven antics with your player character. While some may disagree with this and would have liked more group content like dungeons or raids, Final Fantasy 14: Endwalker does something incredibly cool with those. The game manages to contextualize the absolute power of your character, who is now a demigod-like force in the world, and instead puts you in the shoes of normal people.

But, along with these fantastic moments, there are a handful of low points, mostly what often feels like ‘filler’ content from talking to NPCs in a certain area, or having the pacing suddenly slow in the middle of a climax for hours. Coupled with the confusing decision to go on escort missions, which are enjoyable in theory, but frustrating in practice. Endwalker isn’t without fault, especially with the pacing of its grand narrative.

However, the times when you finally get to party content, such as dungeons and trials, just seem like a huge payoff. These form the basis of the raid content, where you can take on one of multiple combat roles. A tank leads the charge and draws enmity from enemies, a healer keeps the tank alive, and DPS classes slash enemies. You can freely switch between these task types with a single character. With two new classes in tow for the brand new expansion.

The raid content forms a denouement to the terrible stories and tales told to you before them, they are all in themselves brilliantly crafted. Armed with a litany of interesting and surprising mechanics that will challenge you, as it looks like the game’s normal difficulty has been set slightly higher than usual, that’s no bad thing, as the stakes in these dungeons and trials are higher than ever before. They’re pretty far apart, so they take a while to get there, which isn’t due to the somewhat stop-start nature of Endwalker’s unfortunate pace.

It would be remiss not to mention Masayoshi Soken’s memorable score, with melody and motif brought in to wrap a tight sonic thread. The range of genres the score uses ranges from Bollywood Tabla drums to what can only be described as Operatic Ska. Either way, it forms some of the most memorable bits of a Final Fantasy title we’ve seen since the legendary Nobuo Uematsu’s departure from the franchise, although it did work to mark the main themes of a handful of previous expansions and A Realm Reborn.

Endwalker’s main enemy is inheritance. To access Final Fantasy 14’s fantasy expansions, you need to wade through A Realm Reborn’s old and tired core content before hitting Heavensward, where the quality increases exponentially. This might be the game’s biggest weakness, as it will deter players from making the journey to end up in Endwalker. Square-Enix does indeed sell story skips and level ups that will get you into Endwalker faster, but that would be losing the weight of the story it presents. If you’re just into raid content, fine: but Endwalker’s crown jewel is its story, and missing that is a shame.

For context, as someone who started their journey in Final Fantasy 14 several years ago, we’ve since gone through 40 days of total playtime, including secondary content, high-end raids, and multiple jobs at the level 80 or higher. My playtime is now 43 days after finishing Endwalker from 6.0. It’s high time for Square Enix and the Creative Business 3 team to give new players access to all future expansions, without the baggage of what came before.

The game also launched with a lot of fervor, meaning it even took hours to get to a server in Europe, with regular queues exceeding 6,000. apologies, granted seven days of free game time to those who suffered numerous errors and exorbitant line-ups. The developers have been incredibly transparent, we just hope that with the game more popular than ever, they look to build their server capacity to serve the player base that Final Fantasy 14 has reached since the significant increase in player numbers that we saw earlier in the year. .

Final Fantasy 14 isn’t without fault, with a rocky launch for its servers simply not being able to keep up with the number of players wanting to play. On top of that, there are some confusing decisions when it comes to the design and structure aspects of his quest. However, what he brings to the table is a lamenting story of what once was, futures to come, and mortal struggle. Peppered with fantasy trials and dungeons throughout, Endwalker is a Final Fantasy worth seeing, if you can get through the mountain of content it takes to get there.